Idaho Bird Camp (or how Wendy got her running groove back) 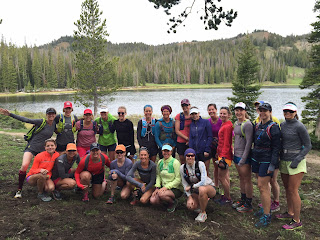 ~Howard Thurman (I read this quote on Rebecca's blog and thought it was perfect).

Last week I had the amazing opportunity to attend a regional Bird Camp in the mountains of Idaho. Challis, ID has a year-round population of 1,081 which increased by 20 when a group of strong, enthusiastic women of the Oiselle Volée Team traveled from California, Oregon, Washington, Montana, Colorado and Texas. And the travel was not easy. It involved short flights and long drives, but every single one of us would do it all over again without missing a beat.

After packing and unpacking and packing yet again (It was hard deciding what to bring without overpacking!) running and relaxation outfits, my sleeping bag, three pairs of running shoes, sunscreen and snacks; I headed to the airport to catch my evening flight to Salt Lake City. SLC is an approximately 5 hour drive to Challis.The other option was to fly into Boise, which is a 4 hour drive but doesn't have the direct flight options from Southern California. Tina, who lives in SLC, offered to drive and both Beth and I jumped at the opportunity. Both Beth and I flew in the night before Bird Camp because we didn't want to risk an early morning flight with the long drive and so after picking us up at the airport (Beth flew in earlier), we headed to Tina's house for lots of chatting (and sleeping). 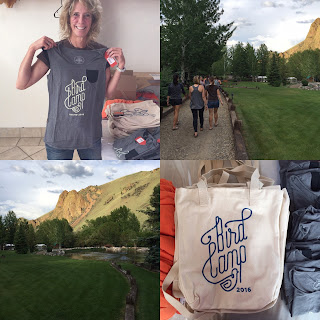 To shake out our legs before the drive, we went on a short run with Opal (one of Tina's pups. Bourbon, the other has retired from running). When I saw a bagel shop after 3 miles, feeling the effects of SLC's elevation, I took the opportunity to suggest stopping for coffee. After showers and breakfast, we hit the road  with a planned stop in Pocatello, ID for lunch (Portneuf Valley Brewing - great food and beer!). 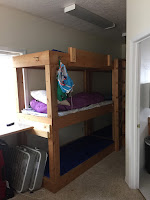 We arrived at Living Waters Ranch, our camp location for the week, at 4:30 pm or so and were the first group to arrive. We met Lyn at the camp hall, fellow team member and camp organizer (& ultrarunner extraordinaire) who showed us to our cabin. Most Bird Campers slept in two rooms, each with 15 bunks. We ended up sharing with only 8 women total so we used the extra bunks for storage.

We unpacked and headed back to the hall to wait for the others to arrive. We didn't have to wait long. The next groups to arrive included Sarah Lesko, Nelle Horsley and Beth McAlpine--part of the Oiselle Nest (staff). 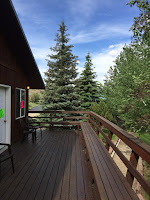 Over cheese, crackers and crudites we introduced or re-introduced ourselves and collected our swag from sponsors: Picky Bars (already a Picky Clubber; new flavor, Moroccan Your World), Stance (my run sock of choice, especially the crew length), Gen UCAN (been wanting to try this!), Nuun Hyrdration (already a big fan and team member), Run Gum, Momentum Jewelry (love my Head Up, Wings Out bracelet). We also received a camp bag, Idaho Bird Camp t-shirt and hat from Oiselle.


Soon after, Trisha Drobeck arrived. She is a member of the Haute Volée and qualified for and ran in the Los Angeles Olympic Marathon Trials earlier this year.  We ended the night with lots of good conversation and drinking sangria and wine out of paper bathroom cups (love it). 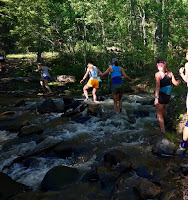 I woke up to sounds of birds chirping and the gurgling creek. It was awesome. I also woke up later than my usual 4:30 am weekday wake time. That was also awesome. After breakfast at 7 am, we loaded up the SUVs and heading up to the Juliet Creek trailhead for our morning excursion. The Juliet Creek Trail is very technical and very fun with multiple deep creek crossings including climbing over fallen trees. 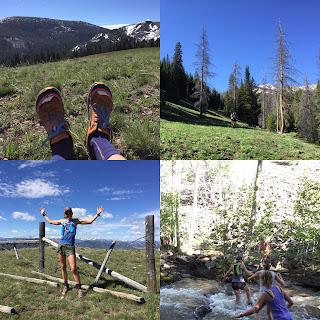 I lost count how many times we crossed the creek, but our first time was within the first few minutes.
We were warned our feet would get wet! (which is why I packed two pairs of trail shoes). We started at approximately 7,000 feet elevation and climbed to 9,100 feet in 4.5 miles. Phew! I had a blast. It was hard, yes, but worth it. 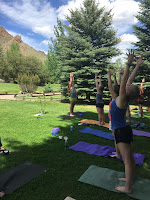 After lunch (including a delicious kale almond strawberry salad), we met up outside our bunkhouse for some creekside yoga. Brandi, one of the campers and an ultrarunner, led the group with hilarious commentary. I heart Bird Camp.

Also included in the afternoon's activities was a Bird Camp Trunk show where we had the opportunity to learn about some of Oiselle's current styles and buy some new clothes. I tried on and bought a pair of Fancy Stride Shorts in Midnight-Molecular print with a matching Gifted Verrazano Bra. Both of which, I would not have bought if I didn't try them on and realized how comfortable they were. I also learned that it is best to size down in compressive, fitted shorts. 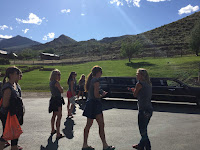 Dinner was a planned excursion to Antonio's, a restaurant in Challis proper, for pizza and beer. What we didn't know until that day, was that we were being picked up in two limos! I bet we're the only Bird Camp with limo service.

Some of us woke up early for a pre-breakfast run or hike. The run was 6 miles with the first half all uphill. Phew. My lungs were feeling the elevation and the incline. After breakfast we gathered together for a schedule of lectures and discussions. Dr. Sarah Vlach, not only a board-certified physician specializing in sports medicine but also a kick-ass ultrarunner, started us off with a talk on health and women endurance athletes. Nelle Horsley discussed Oiselle's design process and we got to preview some Fall 2016 items not yet available (I'm excited!). Beth McAlpine, who is responsible for hello@oiselle.com and a very talented sewer, discussed her work. We ended the morning with Sarah Lesko leading a discussion on the history of Oiselle, the Oiselle Volée and future directions. 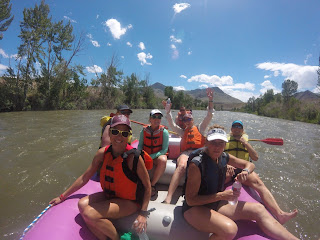 After lunch, we slathered on sunscreen and headed to the Challis Bridge to meet our guides for our afternoon Salmon River rafting trip. The views and rapids were unbelievable. At one point, I was bounced out of the boat into the rapids and was able to hold on to the side rope and get back into the boat. I was also able to hold on to my hat, sunglasses and flip flops. No idea how I was able to do that. It was very exciting. 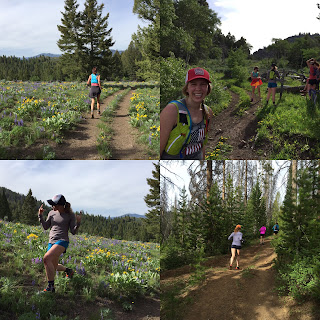 The main event for Saturday was a surprise trail run led by Paul, son of Dr. Bob Lind (of Western States 100-mile Endurance Run fame). The weather was a bit chilly when we started, but things soon heated up.

We started at 8,500 feet, climbed up to 9,000 feet and then shot all the way down to 7,400 feet. Then it was back up to 9,000 feet before leveling out and returning to 8,500 feet. The trail had lots of steep inclines and a couple of birds took some good tumbles. The views were majestic, fields full of wildflowers and snow-capped mountains. 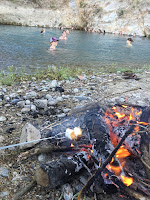 Saturday night, after dinner, we headed out to the hot springs located on Lyn's property for a night swim and campfire s'mores. Although it was a little chilly, the fire kept us warm and Trisha shared her running wisdom including the tip to eat the biggest dessert the night before a marathon. She says it tops off your glycogen stores and you will race well. The night before the Olympic Trials she had 6 chocolate chip cookies, but her usual choice is a big-honking slice of chocolate cake.  Other tidbits include making every mistake there is (just like us!) and she has pooped all over the country (just like us!).

Last day at camp! After a short run, we had breakfast and headed back to the cabins to pack up. Beth, Tina and I were the last ones to pack up and leave. We were the first ones to arrive and the last to leave--squeezing every last bit of fun out of camp! We had to drive back to SLC, but our flights weren't until later that night.

THANK YOU! To all the inspiring athletic women I met, to Oiselle and Sally Bergesen for having the vision of an inclusive sisterhood and creating a network of support that transcends abilities and geography and to Heather Stephens, Sarah Lesko and Lyn VanSchoiack for planning a kick ass Bird Camp.

Prior to Bird Camp, I was in a mental slump because I was *just* starting to run again after my series of injuries and knew I had a long road in front of me to get back into running shape. I've been inspired and I'm now ready to take on my training for the fall race season (starts June 20) AND I'm excited to do it! 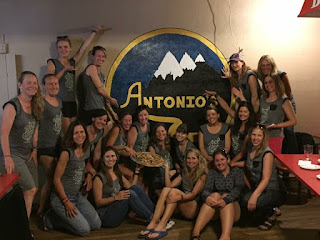 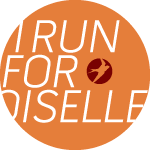 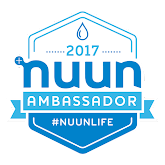